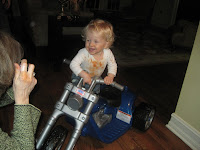 Noni + Daddy = News Toys for Jackson! Noni and Daddy decided to go on a little shopping spree for Jackson. He got a new automatic motorcycle and a playhouse. He loves both of them. At first he couldn't figure out how to make the motorcycle move, but now he understands how to push the pedal. As far as new things in the world of Jackson, we have added a new word...no. I don't think he always understands what it means, but sometimes it is very obvious that he does! Jackson can now open all doors in the house, so whenever you come to visit, you better lock the bathroom door! Jackson is also really starting to use his fork with meals. He is not very consistent, but when he gets the food on the fork he gets very excited! Last weekend we went on a roadtrip to Jacksonville so daddy could run the 15K river run. We had so much fun with all the kids! Jackson was such a trooper. I only have a couple of pictures and will post them next week. The weather is starting to warm up in Atlanta so we are very excited to get to do more outdoor activities. We are playing around with 1 nap from about 12:30 to 3:00 pm. He has done pretty well the last 3 days, so we will see. 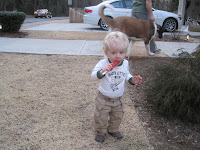 Jackson eating his first popsicle. He was not so sure about how cold it was! 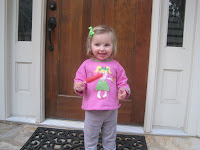 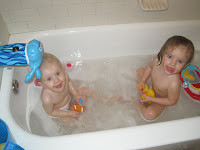 We had the pleasure of watching Mary for a night. The kids had so much fun together! Here they are enjoying bathtime. Not only were they both looking up at the right time, but they both had toys to hide any parts that we don't want photographed! 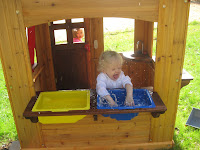 Jackson playing with the splash tub in his new outdoor playhouse. This was definately the hit of the whole house! 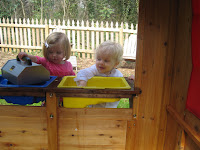 Jackson and Mary playing in the playhouse. 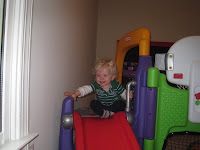 Jackson has finally learned to climb up the stairs to the slide in his playroom. He loves it! 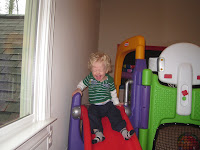 So excited to go down the slide like a big boy! He used to go down backwards, but now he will sit face forward.
Posted by Elizabeth at 3:16 PM

What perfect timing on the last picture of the post!

Hopefully noni and granddaddy will always bring lots of fun. Especially since being with Jackson always brightens our days. Enjoy your time with Peebo and great granddaddy and GLO! Wish we could be there.

I can't wait to see and hear all of Jackson's new accomplishments! I agree with Aunt Sarah...that last pic is priceless!!