Spirit week at Walker! Last week was homecoming, so to celebrate the big game, the kids had to dress up in a different outfit each day. The first day was dress in your favorite sport's gear, so Jackson chose his Dodger's jersey!

Posing with his brother :)

The next day was dress like your favorite cartoon character. Jackson was super excited to go as a teenage mutant ninja turtle. First thing he said was, "Mommy, I think people will still recognize me because of my hair." Super cute and probably correct!

Where your pajamas day! I think this was his favorite day :)

Dress like another time period day. Luckily we still had this knight costume!!

Happy 1st birthday Ben! I really can't believe that a year has gone by since this cutie was born!

We met the gang at Chick fil a for some dinner, cake, and presents. Ben loved the cake! Unfortunately, the cake had a little accident and landed on the floor :(

Annual pumpkin carving at the Foster's! The Foster's live on this great house with a barn in the backyard. Christine just such a great job getting it ready for the kiddos and plays "Charlie Brown's Great Pumpkin. The kids loved it!

Smores! Beckett couldn't wait to get it in his mouth!!

Going in for a big bite!

Beckett dug right in and started scooping out all the guts. He would get some and say, "Yuck!"

We also had a super fun birthday party at the bowling alley. This is the second time Jackson has been bowling and he loved it. He was super excited when he got a spare!

The best part of the party for Jackson was when they got to play all the games. He loves them! Here is Jackson and Nathaniel plaing fruit ninja.

Another tee ball season has come to an end. Jackson had so much fun and had a great team. He has improved so much in the two short seasons he has played. We are so excited to play with these kiddos in the spring!

Beckett also got to join in the dress up fun! He had dress as your favorite animal day at school. He was supposd to be an elephant, but I couldn't find the costume :( We had to squeeze him into his dragon costume from last year but at least he had something!
Posted by Elizabeth at 8:47 PM No comments:

Sorry for the delay in blogging, but we had a total disaster in the Nesmith household....our harddrive fried. The good news was we were under warranty, so they repaired it for free. The bad news was we lost everything. Thank goodness for the blog otherwise I would have lost every picture for good! I really need to be better with backing everything up to CDs. Anyway, we are in full festivities here! This is my favorite time of year but is also one of the busiest! We started out with our first tailgate at Walker for the football game. The preschool teachers served ice cream to the little ones and then it was off to watch the game.

Jackson was so excited to see his teacher Mrs. Reddick!

Jackson and Nathaniel enjoying their ice cream! That night Jackson actually had his first sleepover! Nathaniel stayed the night with us and they did great! I think they were all worn out from running around at the football game because as soon as we got home, we took baths and they went straight to bed. They didn't make a peep!

Here are Jackson, Thomas, and Nathaniel watching the football players take the field!

The boys getting ready to watch the game. Go Wolverines!

Jackson found his buddy Colin. They have an open grassy area next to the football field and the kids just ran and ran. They had so much fun!

The next day we were up bright and early for the pumpkin patch! We went to Bert's again this year, which is about an hour drive, but so worth it. The pumpkins are huge!

Beckett pointing to the big pumpkins. He just kept walking around all of them and touching them. It was really cute!

We let Jackson pick out all the pumpkins again this year and he made some great choices! He chose all different shapes and colors.

Beckett loved looking at all the little scarecrows

One of the better parts of this pumpkin patch is the hayride. There was a very long line, so as daddy waited patiently for us, we found other ways to entertain ourselves. First stop, tractor ride!

Beckett had to get in on the action as well!

We finally had our turn on the hay ride! Familly shot time!!

Beckett wasn't quite so sure about the hayride. He just sat very still on daddy's lap.

Jackson loved it! He loved looking at all the pumpkins and fields of sunflowers.

After the hayride, it was time to get the wagon to pick out our big pumpkin!

Jackson picked out 2 little pumpkins for Beckett. Beckett, of course, tried to eat them.

This is the one!

It got pretty hot so we decided to cool off for a bit with a slushy! Beckett was a fan!! 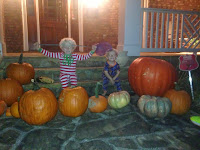 Did we go overboard this year? 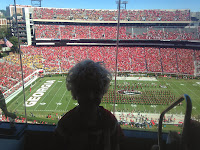 The next day we headed to Athens for the Georgia game! We were so lucky to be invited by friends that have their own private box! Talk about first class!! We left Beckett at home because we thought the long day would be too much for him and headed to the game! Our friends picked us up in their huge van that had the biggest tv screen I have ever seen in a car. The kids watched tv and movies, and the adults chatted.  Perfect!! 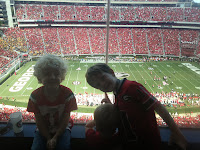 Jackson and his buddy Christopher in the private box. Once we go to  the box, there was food and drinks waiting for us. It was a great experience. Unfortunatley, Georgia lost, but kids and adults had a great time. Since we were in our own box, if the kids got tired of watching the game, they could run aournd and not disturb anyone. It was great!

Buddies....these two really are sweet friends :)
Posted by Elizabeth at 9:50 PM No comments: 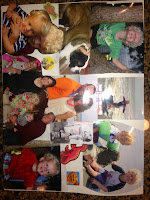 We have had an amazing start to our first year at Walker! Jackson is learning so much and has made so many new friends. One of the cutest things they do at school is each child gets a reading buddy. Each preschooler has a second grader for a reading buddy who comes to their class and reads them a story. The second grader practices their reading skills and the preschoolers get an older buddy. Jackson for the first time has had show and tell and homework. Show and Tell is all about building the kids confidence with speaking in front of others. Jackson's first show and tell was to make a collage about his favorite things and his family. He then got up in the front of the class and told them all about his pictures. I wish I could have seen him and heard what he said, but the teacher said he did great!

Jackson has a project to complete each week. Each week he gets a special book and at the end of the book he has a project to complete. His first book was about a little boy who grew a huge carrot! His homework was to have mommy or daddy draw the biggest carrot they could and then he had to color and cut it out. He was bring it to school and they would see who could draw the biggest carrot. Little did they know that Jackson has a very competitive mommy who decided to draw an 8 foot carrot!

We decided to paint outside with no clothes on because I didn't have any washable paint. I told Jackson to be very careful because if he wrote on the driveway, "Daddy will have a heart attack" I went inside to clean off his brush and Jackson came running in screaming "Daddy is going to have a heart attack! I spilled some paint!!" It was so funny and reminded me that I need to choose my words carefully!!

All done! I was so proud of him for coloring the entire carrot by himself. He then had to cut the entire thing out.  At one point he said, "Mommy, I think this project is too big for me" :)

They even had a special visit from the Walker mascot, Joey T!

This is Jackson best buddy in his class Collin. We hear about Collin every day and how he is coming over for a sleepover. What we didn't know was that Collin also plays tee ball at Oregon Park. They had to play eachother and both told eachother they wouldn't get the other one out because they were buddies :)

It is crazy to think one day Jackson may be on the other side of that table!

Nothing like a little ballon sword fighting with his buddy Thomas!

And the finale...a parrot on his shoulder. The next even is a tailgate before the Walker homecoming football game. Jackson can't wait to sit in the stadium and watch them play!

We have started another season of tee ball! Jackson loves it!!It is amazing how much he has improved in just half a year! He now hits the ball pretty much every time without the tee.

Waiting on third to be hit home!

We were so lucky that Graddaddy was able to come and watch him play and play with Beckett :)

This was the last smiling picture of Beckett for a few days. The next day poor Beckett was so sick with a  GI bug. He had a horrible diarrhea for 2 days but quickly bounced back. I can't say the same thing about his big brother!

Since the 4th of July fireworks were rained out, Marietta decided to have the makeup day the last official day of summer. We weren't able to head to out to see them because Beckett was sick, but luckily we had an awesome view from our front yard! Good to know for next 4th!! 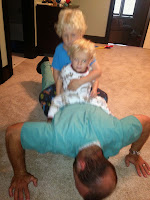 Back to poor Jackson. We had the roughest 8 days with my sweet boy. Jackson got Beckett's virus but it hit him much harder. He ended up getting so dehydrated, that we had to take him to the ER for IVF. It was a horrible experience that I will not get into on this blog, but luckily momma bear came out and Jackson was given the treatment he needed. After the fluids, we thought we were over it, but he still was not able to keep anything down without antinausea meds. We went this time to our pediatrician who diagnosed him with gastritis and started him on a reflux med. Since starting the med, we have been vomit free and Jackson is back to his old self again! It was a tough week on mommy and daddy and we are so thankful our little man is healthy again!!
Posted by Elizabeth at 2:35 PM No comments: