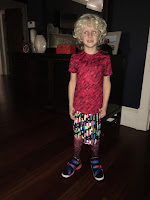 Summer is officially over and the kids are back to school! I wasn't ready for it to end, but the kids were ready to get back to it! We did some school clothes shopping and Jackson picked this outfit out all by himself. It doesn't meet the dress code, so he will have to wait until athletic day to show off his style! 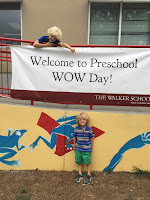 Beckett is now at Walker! I can't believe that my baby is in Pre-K. Not only is he is in Pre-K, but he will be going full days from 8-2:30 5 days a week!! He was so excited to finally go to the same school as his brother. Jackson was also very excited for him and told him all the fun things he was going to get to do. 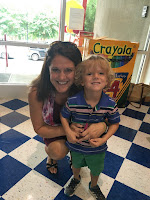 How lucky is this guy to have Mrs. Moffett as his principal! 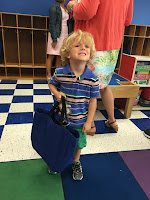 Meeting his teachers and getting his bag! 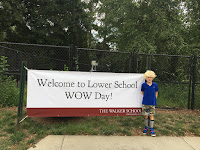 After Beckett, it was time to meet Jackson's teachers. Jackson was very excited that he got Mrs. Aho this year. He didn't want to take any photos inside as he was too busy decorating his locker and talking to all of his friends. We are looking forward to another great year! 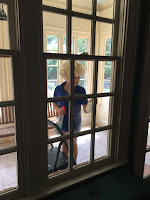 Jackson decided he wanted to earn a little extra money, so he started cleaning the windows. It cracks me up that he is cleaning windows in his underwear! 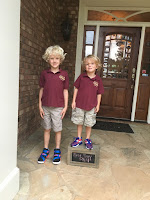 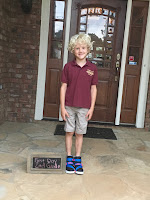 My big 2nd grader. I just cannot believe he is in 2nd grade! It seems like yesterday I was taking him to his first day of Pre-K at Walker. Now he seems so grown up. 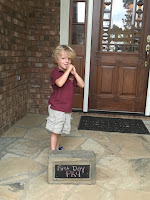 My sweet baby. Beckett did a few camps at Walker this year and liked it, but he hated rest time. That was the first thing he asked me when he was getting ready to go to school. He did not want to have to rest. The first 2 days were half days, so there was no rest time. On the first full day, I asked him if he had rest time. He said, "Yes, but I didn't mind because I was really really tired. " Mrs. Smith, who I love, sent me a picture of him and he fell asleep as soon as his sweet head hit his pillow. 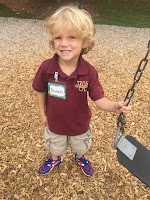 Mrs. Moffett sent me this pic of Beckett all smiles on the playground! 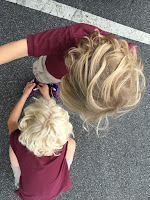 I was so excited to pick them up from school and hear all about their first day. Both kids have had great starts! Since it was a half day, we celebrated with lunch and Beckett picked out his favorite...Panera. I thought this was sweet. Walking to Panera, Jackson stopped to help Beckett tie his shoes. He is such a good big brother!! 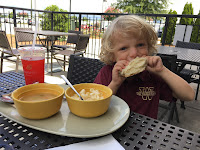 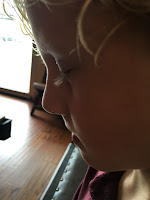 After lunch, we headed to the square for back to school haircuts. I looked over and couldn't help but notice how long Jackson's eyelashes are! I am so jealous!!! 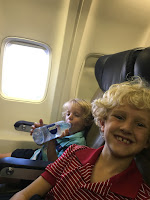 The next day, Thursday, the boys and I played hooky and headed to visit my sister back home for 1 last hoorah! Jackson was so excited to go see his cousins, but he was also sad that he was going to miss the first full day. 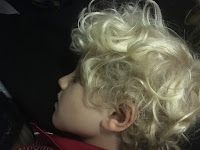 The first week of school has really wore these 2 out! This was Jackson 10 minutes into the flight. 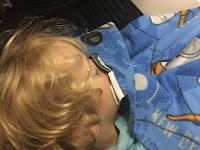 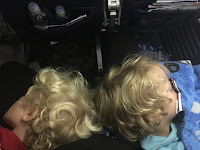 These 2 cuties slept on my lap the entire 1 1/2 hour flight. 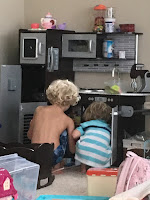 Friday the kids woke up and started playing. Maybe we should have invested in a kitchen? 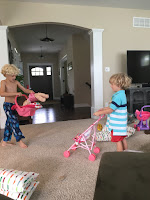 And baby dolls....this was all cute and I had visions of them being wonderful fathers until it became a game of lets see how far we can launch the baby..... 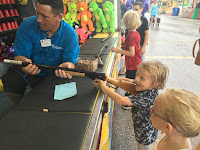 The forecast called for rain, but we still decided to risk it and head to the fair. Believe it or not, we did not ride a single ride! All the kids wanted to do was play the different games. Beckett loved any shooting game. 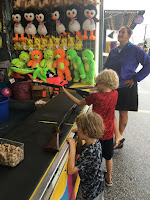 At the end of the day, Beckett really wanted to win this plastic gun that he saw. In order to do it, you had to shoot this rubber block down with a cork gun. I tried but failed, so big brother Jackson came to the rescue. He knocked it down on his first try! It was so sweet to see him pick out the gun and then hand it to Beckett. He was so excited!! 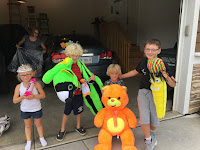 We cleaned house! I, of course, had to play the basketball game and won those 2 giant stuffies. They were so big, poor Sarah is having to ship them home to us! 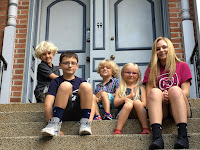 Greg flew in Saturday morning and we headed downtown for the day! We started off eating lunch at Chicago Pizza Oven and Grinders. We had to wait a long time, but it was so worth it! They make these pizza pot pies that are delicious!! This was the kids sitting on a brownstone's steps patiently waiting.

After lunch, we did some shopping and headed to our hotel for a drink. Since we were leaving early the next day, we decided to stay at the Loews hotel. The adults grabbed a drink while the kids played and had a snack. These 2 and their silly faces!! 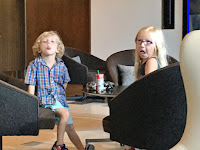 We then headed to Navy Pier to ride the Ferris Wheel and take a sailboat cruise that ended with fireworks. It was so beautiful on the boat. My kids were so relaxed, that they both fell asleep before the fireworks show even started! I think we wore them out!! We had such a great trip and can't wait until our next visit!! 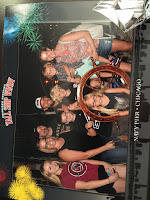 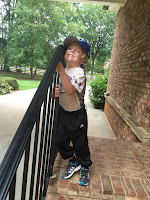 Back home, the kids started their first full week of school. With school back in session, that also means back to sports! Jackson has started football and this little cutie had his first t-ball practive. He did great! He hit the ball super hard off the tie and stopped 2 grounders!! He also hit the ball and ran to first, which can be a challenge for some kids at this age. So proud of my little guy!!
Posted by Elizabeth at 9:04 AM No comments: