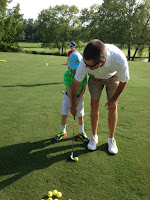 Oh glorious summer! How are there only 2 weeks left? We have had such a great summer this year, and I really am sad to see it come to an end. I have loved the beach trips, lazy mornings, late nights, swimming, and just playing. Jackson has started doing golf on Saturday mornings which has been so much fun! They had a chipping contest and guess who won? Jackson got to pick out anything he wanted in the pro shop and he picked out a camo country club hat. :) 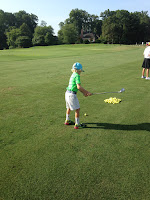 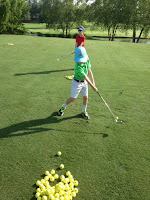 4!! Jackson went with his buddy Christopher.


Jackson had his first "real"sleep over at our house with his buddy Jack. They had the best time! Our Friday night routine has been to head to Marietta Pizza Company with friends after boot camp. They have a great little play area with games that the kids can run and back and forth to. The kids play and the adults have an enjoyable dinner :) 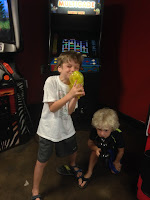 After pizza, we headed home for a little night swimming! This was always one of my favorite things to do with my dad growing up. Beckett loves to show off his floating skills!

Where did our puppies go? The dogs are gettting huge and super sweet! Here if Fireball keeping an eye on the boys.

I wonder if they found anything?

After swimming, the boys headed right up to bed. We must have worn them out because they were sound asleep at 10 pm!

Guess who got his very own bike and rides like a champ!! Daddy accidentally ran over Beckett's hand me down bike, so Beckett got to go to the store and pick his own bike out. He was SO excited!

Jackson has been into Spy Gear this summer. He has an alarm on his door and now has these binoculars that amplify sound. Greg was all the way by the garage and whispering for him to squat down. He could hear us!

This past weekend we hosted Angie's baby shower. I still can't believe she is having a sweet little boy in just a few weeks!

We can't wait to love on the newest baby Konop!! 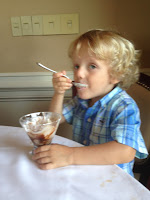 We haven't done brunch after church in a while so this past Sunday we decided to revisit. It is always very good but the boys can be a little loud. They did great this visit and we only had one chocolate milk disaster :) 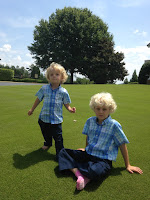 Attempting to get these 2 to take a photo is nearly impossible! 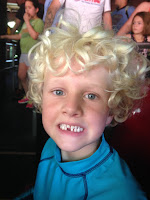 One afternoon, we decided to brave the heat and head to Six Flags! This is Jackson right before his first roller coaster of the day. He said he wanted to go on the big roller coasters, but I thought it was wise to try the little wooden one first. Good thing I did because Jackson thought that was as much thrill as he needed! 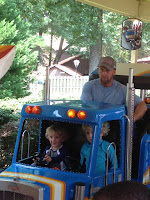 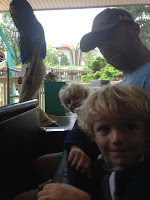 Surprisingly, Beckett is big enough to go down Splash Water Falls, so we decided to give it a family try. They loved it! I thought for sure Beckett was going to scream but he went down like it was no big deal. 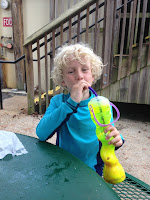 Oh Six Flags, thank you so much for introducing my children to the slurpee... 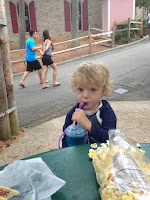 Beckett will never be the same... 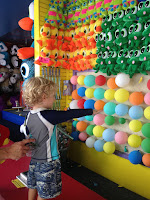 After some rides, we tried our luck on some games. Here is Beckett throwing darts. He won......after about 10 trys. In the words of Lego Batman...."First try!" We have 2 more weeks of summer to live it up and we plan to make the most of it!! Jackson found out that his teacher this year with be Mrs. Woods and he is SO excited. This is the teacher he wanted. He is also super excited because for the first time his buddy Thomas will be in his class. We have been doing a lot of reading this summer with visits to the library weekly, so I'm confident Jackson is ready to tackle first grade!!
Posted by Elizabeth at 9:33 PM No comments:

4th of July at Kiawah!

Happy 4th of July! This is the second year in a row that we have spent the 4th at Kiawah, and we have decided to make it our annual tradition. We headed down on Tuesday night and stayed through Sunday. Our great friends the Konops made it down again this year and arrived on Thursday night. We had the best time! Because of the recent outbreak of shark attacks in the Carolinas, I was a little worried about letting the kids get in the water. The beach patrol was patrolling and there were no shark sightings. We still decided to play it safe this year and stayed in knee deep water. The kids boogie boarded but we did not do any surfing this year.

My traditional pic of the boys on the boardwalk :). They are always thrilled to pause so I can snap a shot ;)

No surfing but boogie boarding is almost as good!

This kid is just to content to play with his trucks and boats in the sand.

Jackson was so excited to get a woofle ball set to play at the beach. I think this kid could play baseball all day if we let him!

There were all these little tide pools which were perfect for Beckett. He loved playing with all his toys in them!

Noni got out all of daddy's old trophies, medals, and jerseys. Jackson was in a heavan looking through all of them! He wanted to keep everything, but we were able to convince him to just keep a few things. Here he is wearing his daddy's jersey.

Beckett finally got his taste for the ocean and wanted to boogie board!

This is by far my favorite thing about Kiawah. It is 4th of July weekend but the beach is still not crowded. Where else could you have a woofle ball game on the beach?

After a day at the beach, it was time to head to Freshfields for the concert!

Oh how I love that face!!


There is a little toy store at Freshfields that the kids love to go to! They are allowed 1 thing each trip. Jackson chose an adventure kit with binoculars, compass, etc. Beckett chose a plastic boat. Payton picked a jelly bean game. The kids had to play it! There are a bunch of jelly beans and some are good and some are bad. You don't know which you get until you taste it. Gross!!

We always have to have ice cream at the beach!

And then there was dancing! I don't think I have ever seen Jackson dance so much!!

After the concert, we headed down to the beach to see Jupiter and Venus. If you look closely above the tree, you can see them!

4th of July started with beach and pool time! They had a band at the pool and the kids were able to join in!

After we swam, we headed to the festival. The rain didn't totally cooperate, but we were able to get in all the fun before the downpour and still were able to see the fireworks!

Jackson couldn't wait to try the rock climbing this year! His memory always amazes me. He quickly reminded me that you have to have closed toed shoes. Last year Payton didn't and had to squeeze into Jackson's shoes.

After the rock climbing, we had to see the jugglers!

Next stop,..craft time! We are working on Jackson's smile. He tends to smile really big. Greg decided that he should just stop smiling. :)

Last but not least,..face painting.This was the time it started to look a little scary. We decided to get our food and try to wait it out in the car. It didn't look like it was going to clear up, so we picked our stuff up and decided to head to the Homeowner's to watch the Sanctuary fireworks under cover. It worked out perfectly! We had the best holiday weekend. Thanks Noni and Grandaddy for all the amazing memories!

We can't wait until our next beach trip!!
Posted by Elizabeth at 10:37 AM No comments: